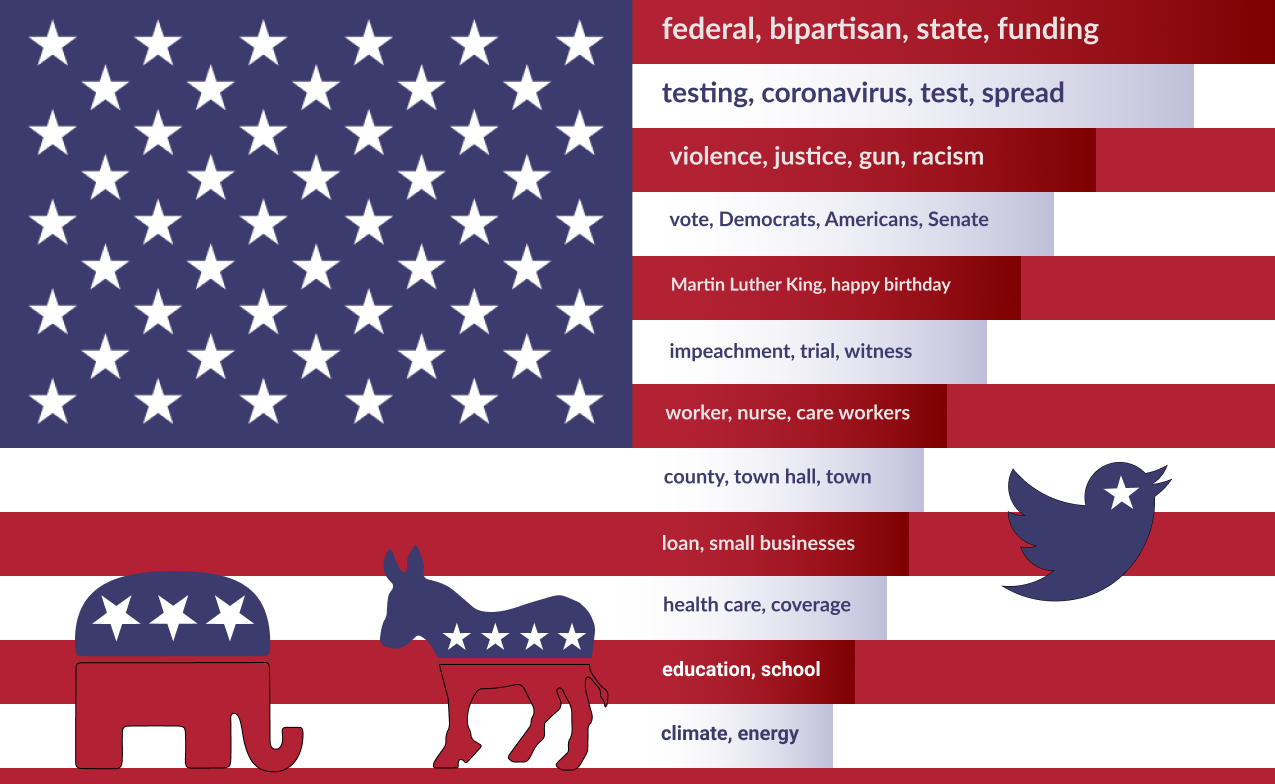 How the US Congress Tweeted in 2020 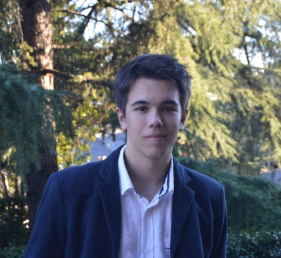 We analyzed almost 200K tweets written by members of the House and Senate from the 17th of January - the first mention of Covid-19 in a Congress member's Twitter - to the 1st of July. Much has happened in these few months, and we will analyze how different members chose to phrase their opinions and how the general public reacted. What makes a tweet go viral? Which party triumphs in popularity? What topics did each party talk about?

In 2020, it is more likely that Trump will communicate something of importance through a 6 a.m. tweet than through a national TV announcement. Politicians use Twitter to communicate directly with voters and, for better or worse, bypass the media.

Republicans are much more effective at creating viral tweets.

Even though Democrats wrote almost 50k more tweets than Republicans, the latter just seem to be more efficient when producing popular tweets. What is the key to their success? How do Republicans achieve such popularity? We decided to take a deeper look.

We took all tweets posted in this time period and divided them into tweets posted by Democrats and Republicans. We analyzed these tweets separately and then selected only the top 10% most retweeted posts to see what worked for each party.

Republicans blame China and Communism for Covid-19 - and it works!

It seems that antagonizing China and talking about the impeachment were very positive strategies for Republicans. They only posted 42% of all tweets by Congress members, but what they tweeted did quite well. They seem to have a better grasp on how to post things that will go viral, which words to use and how to phrase what they want to say.

Democrats were overall less effective. They posted 114k tweets and still did not gain the traction their counterparts did. They did, however, find more success when talking about coronavirus and police brutality than their counterparts.

It is curious that in this time period, where Covid-19 has taken so many lives and jobs, the most used word by Republicans is still "great". We can also see how important small businesses have been for Congress members in this time period, as well as how much traction a tweet can get by simply mentioning the word "american".

It looks as if though we're not the only ones to have noticed that for Republicans, patriotism and blaming China are very successful strategies. Here is a tweet by Donald Trump from July 20th.

Even though Republicans mention Trump very often, the strategy just seems to work very well. Democrats lack someone in Congress that can compete with the President's popularity in Twitter, and we see this paying dividence here. It is also curious that Democrats mention people less often in their tweets, which is an approach that seems to work for Republicans. It is noticeable how important FOX News is for Republicans. Simply mentioning Sean Hannity in a tweet makes it very probable for said tweet to go viral.

Republicans use emojis to much more success than Democrats.

If we look at the bottom section, we can once again see that Republicans know how to use and abuse whatever works for them, while Democrats keep using lack luster strategies. We do, however, see them find some success in things such as public services or support for the African American community, which are topics Republicans don't seem to talk about nearly as much. It is also apparent here that Republicans have an important relationship with conservative talk shows and news channels. Their tweets on the topic tend to do well, and the people involved have large audiences and lots of followers on social media.

Each party has their own set of hashtags.

Except for the obvious #coronavirus or #covid19, we can see that all other hashtags are divided right down the middle. They let Congress members distinguish themselves and share things amongst members of their own party. We see once more that Democrats mention topics related to the Black Lives Matter movement much more often than Republicans, and their tweets on the matter tend to do well. Again we see Republicans finding inmense success when blaming China, a strategy that has given them the edge the past few months in terms of popularity.

However, it is clear that Coronavirus tops the charts here. Just counting posts containing #covid19 or #coronavirus adds up to more than 20k tweets. We took all tweets related to Covid-19 by filtering through words used, and the total added up to 30% of all tweets in this time period (almost 56k tweets!). Let's see how Republicans and Democrats prioritized the topic over time:

At one point, 60% of all tweets by Congress members talked about Covid-19

Instead of taking the absolute amount of tweets, we took the % of tweets by each party talking about Covid-19 to better understand how much importance each party gave to the topic, and then compared those graphs to the amount of daily deaths by Covid-19 in the US. We can see a spike mid March, when all 50 states had confirmed cases and American citizens started to become very worried about the subject. However, it is curious to note that how much Congress members talk about the virus does not have as much to do with the amount of deaths as it does with the political or financial decisions taken due to the virus.

Simple words but lots of them are the key to popularity

Though most tweets stay in that 30-40 word count, writing longer tweets actually highly increases the probability of said tweet going viral. Twitter has a 280 character limit, which means tweets with over 50 words have an average word length of 5.6 characters or less. So long tweets with simple wordings seem to be the key to getting popular posts.

To analyze the topics, engagement and underlying attitudes of Democrat vs Republican tweets.