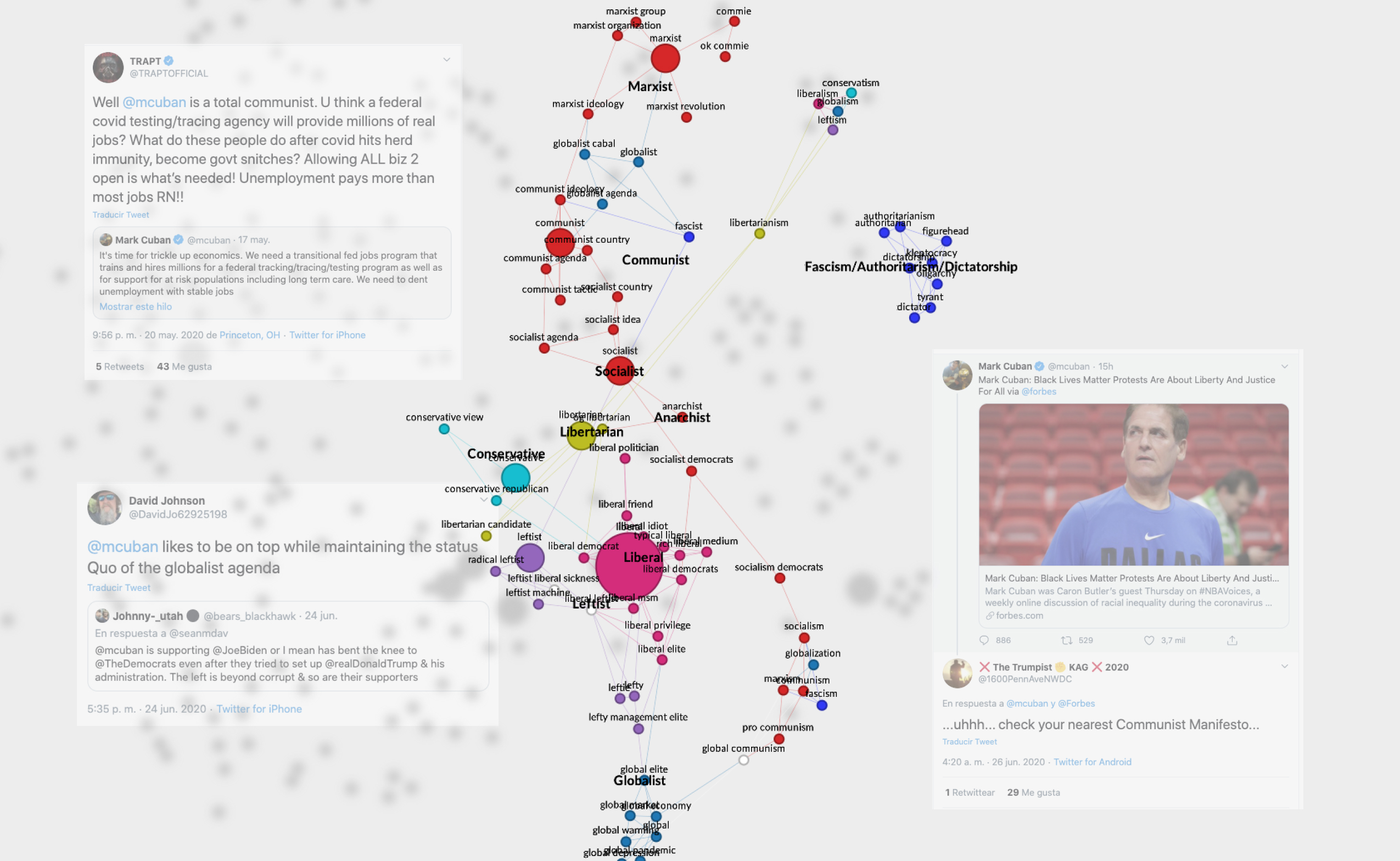 Is Mark Cuban a Socialist, a Communist, a Globalist... or Something Else? How Trump Supporters Attack Another Billionaire

Mark Cuban is one of the wealthiest people in America, with an estimated net worth of $4.1 billion. He also has almost 8M followers on Twitter and everytime he tweets to support stimulus packages, talks about white privileges , endorse Joe Biden he gets literally thousands of mentions and replies calling him a communist, socialist, globalist ... and many other ideological terms.

Since it is impossible to process all these comments manually, Mark Cuban posted this tweet asking for a tool to analyze his own posts.

Since it is impossible to process all these comments manually, Mark Cuban posted this tweet asking for a tool to analyze his own posts. Some people mentioned Graphext in the replies to that tweet - thanks! So that's exactly what we did. Gathering Mark Cuban's tweets, we set out to use Graphext in order to determine how people on Twitter refer to the billionaire.

The team thought it would be an interesting opportunity to explore how Trump's supporters perceive some of the new ideas, like Universal Basic Income, compared with old ideas , like stimulus packages, that a billionaire that could have run for president as a Republican defends after the COVID-19 crisis.

Cuban is more often called a Liberal than a Socialist, Communist or Globalist...

One of the coolest things that makes Graphext especially powerful in analyzing text data is the possibility of not only counting how many times some keywords were used, but also finding and connecting other terms that are even more relevant in the corpus but you couldn't think of in the first place. We use something called word2vec models to compute the similarities between each pair of keywords and then network analysis to cluster similar terms to find more meaningful patterns.

On the chart above, we selected all terms related to ideology and made the size of the terms according to the number of times they appeared in the mentions. There are many different terms related to Communism - marxist, commie - Socialism and Globalism, but we also see how the label Liberal is the biggest one by far. Many other people also talk about Libertarianism, Conservatism or Authoritarianism, terms that are not always mentioned to talk about Cuban's ideology but instead refer to Trump.

There are some tweets that make him out to be more of a socialist, a communist or a globalist.

Trying to answer Mark's original question, we will focus only on the mentions and replies that call him a Socialist, Communist or Globalist. As we can see on the chart there are some spikes during the last 2 months and we compile the most popular posts that sparked these type of mentions.

By using only these exact terms we got 863 mentions, which is about 1% of the total number of mentions and replies he got over these months, but still a significant amount of tweets in absolute terms that would be 2 or 3 times bigger if we added the rest of ideological keywords we identified in the previous insight.

On this other chart we put a sample of specific tweets he got for each one of these terms in case you want to have more context about why people call him this way. You will see for instance that too many people make the easy joke of intentionally confusing Cuban with the Cuban Socialist/Communist Policy.