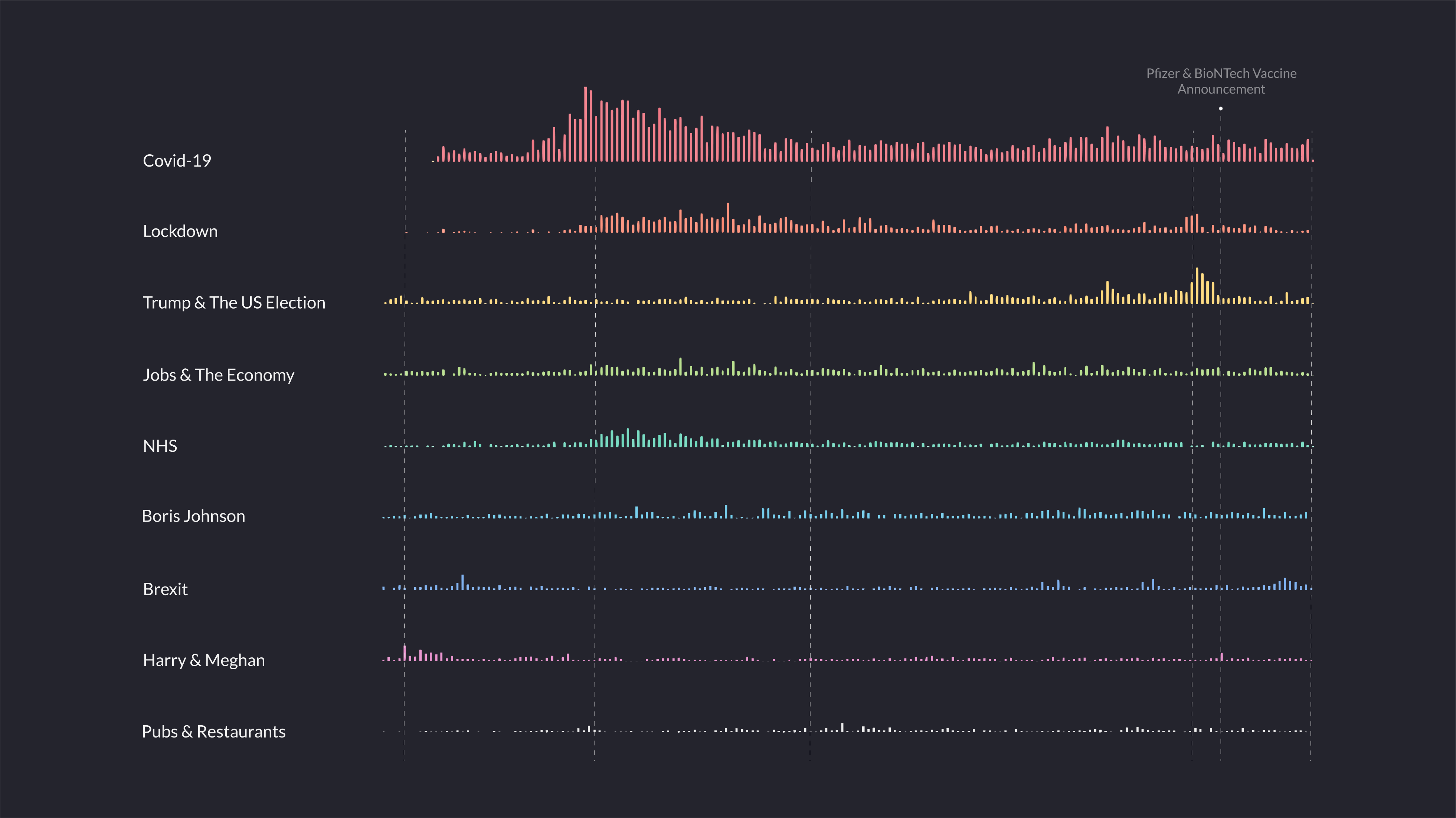 It has been a busy year for the media. Major events like the US presidential election, the Black Lives Matter movement and of course, the COVID-19 pandemic have defined news reports in 2020. With many events this year directly affecting whole populations, news publishers have played a crucial role in informing the public about issues that have had immediate and substantial impact on their lives. In the UK, global events have contended with Brexit, a political earthquake whose tremors will still be felt for some time.

To discover how the UK media have divided their time this year we collected every tweet published in 2020 from the accounts of 38 national news organisations in the UK. We applied natural language processing to each tweet in order to recognise the occurrence of keywords and phrases. Then, after grouping these features into categories, we identified the volume of tweets about this year's big news stories at different points throughout the year. The result is a map of news hitting the headlines in the UK throughout 2020.

In acknowledgement of a “a year which cannot be neatly accommodated in one single word”, the Oxford English Dictionary's annual word of the year has been pluralised. '2020: Words of an unprecedented year' includes lingering locutions like 'bushfires', 'superspreader', 'reopening', 'lockdown' and 'social distancing'.

Quickly after the World Health Organisation announced that COVID-19 could be classified as a pandemic, coronavirus became one of the most frequently used nouns in the English language. News reports about the pandemic have been frequent throughout the year but spiked during March and April as the UK population got to grips with the virus and its effects.

Restrictions, lockdown and quarantine have also remained firmly at the top of news agendas in 2020. Never seen before measures curbing the freedom of all UK citizens have remained a hot topic. With rules and guidance changing as often as they have, it has often fallen to the media to make sense of how lockdown has and is affecting regions of the country.

Trump & The US Election

The US presidential election in November has been one of the most divisive in history. Contending with restrictions around coronavirus as well as the Black Lives Matter movement which has swept through America this year, Biden vs Trump has thrown up all kinds of controversial news headlines. From mail-in votes and unproven accusations of electoral fraud to campaign strategies enacted on social media, as the election approached, coverage was at the forefront of news in the UK.

As restrictions forced businesses around the UK to close, politicians asked people to work from home and rolled out the furlough and job retention schemes in an attempt to save jobs and keep the country's economy as healthy as it could be. Nonetheless, money worries have been a consistent feature of news reports throughout the year with a record level of 370,000 people made redundant during the three months leading up to October.

Naturally during a time of crisis, the British public have looked upon the National Health Service with admiration, gratitude and concern - sentiments that have been echoed by journalists throughout the year. From the moments the country stopped to applaud health workers to overcrowded hospitals and shortages in PPE, the role of the NHS and it's employees has been fundamental to the United Kingdom's response to COVID-19.

At the centre of nearly every national news story this year was the UK prime minister. Unsurprisingly the volume of news about Boris Johnson has remained consistent throughout 2020. Whether it was a prime-ministerial announcement or a response to the misbehaviours of a senior civil servant, the British press have followed and scrutinised his every word.

"A 4.1KM asteroid will close-in on Earth in April, NASA has confirmed - Could end human civilisation if it hits" - @Daily_Express
‍This misleading tweet from The Daily Express received 25263 retweets, making it - sadly - the most shared post from any national news publisher this year.

With the British government and EU negotiators set to honour the transition period deadline of 31st December 2020, Brexit negotiations are back on the front pages having rarely left them since the referendum in June 2016. A rise in news stories about Brexit in December is mainly due to the stalling of trade talks and the increasing possibility of a 'no-deal' exit.

Early in 2020, the Duke and Duchess of Sussex announced that they would be stepping back from their duties as senior members of the British royal family and becoming financially independent. Despite the well-publicised disaffection that Prince Harry and Meghan Markle have had towards life in the public eye, the announcement was unexpected and shocked large portions of the public.

With coronavirus restrictions putting an end to public gatherings for long periods of 2020, the hospitality industry has struggled to cope with the lack of footfall. In normal times pubs, restaurants, bars and nightclubs are a cornerstone of public life. In 2020, their doors open and quickly shut again, these businesses have struggled to keep their staff employed and have been forced to adapt perhaps more than in any other industry.

In what has been described as the most significant scientific breakthrough in recent history, the vaccine announcement from Pfizer and BioNTech on November 9th made news headlines across the world. Quickly followed by announcements from Moderna and AstraZeneca, the news that an operational vaccine against COVID-19 was to begin being used in hospitals in the United Kingdom before Christmas spread quickly.

To discover the underlying trends in UK news throughout 2020.